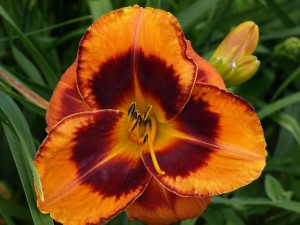 Burnt pumpkin orange with purplish burnt umber eye and gold edge above greenish yellow throat. The eye is hard to describe – it’s so intense that it almost glows. Ron’s been crossing CHOCOLATE FROSTING back and forth with PUMPKIN PAPRIKASH and seedlings from their line, with astonishing results. 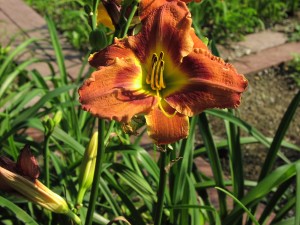 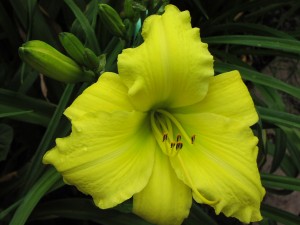 EARLYBIRD CANARY is a clear yellow color with green tones.   Excellent substance accentuated by gentle grooves along the length of the petals.

OK, why on earth did I name a seven inch, hardy, vigorous, daylily after a tiny fragile bird?  William Allen High School’s colors were canary and blue, so our mascot was … yeah, a muscular, feisty canary! 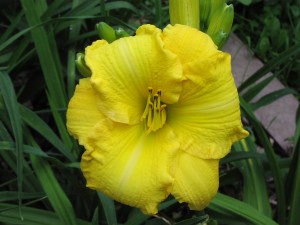 EARLYBIRD DISCO YELLOW is a clear intense yellow self, with strongly recurved shape and firm substance, slightly grooved and slightly ruffled petals, and a dramatic height just under 3 feet. EARLYBIRD DISCO YELLOW’s recurve shows the bright color from every angle in the garden, not just a front view. Note that the 6.25” width is measured net of the recurved – EDY has lots of petal surface. Like a 70’s disco ball, it makes a bright statement in the early daylily garden. 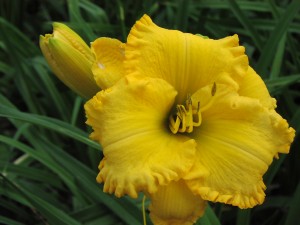 EARLYBIRD GOLD BULLION has a gold self, and captures some of the good substance and ruffles from Fran Harding’s FORESTLAKE POINT LACE. It starts blooming around the same time as Stella De Oro, and reblooms reliably. It’s hardy and vigorous, holding up well to our zone 6 winters. 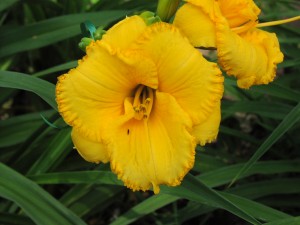 Like some of my other introductions from more than 5 years ago, they were tested in half-shade. The registered 14 bud count with 2 branches is superseded by grown-in-actual-sunshine bud counts of 29-30.

EARLYBIRD GOLD DOUBLOON is deep gold with gold-orange edge and ruffles. Its moderate petal grooves and round petals have bred forward into a next generation who are increasing for introduction. 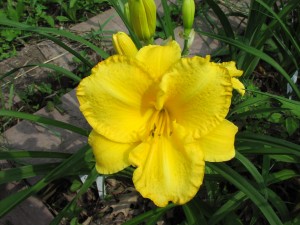 EARLYBIRD GOLDEN HARBINGER inherits its extreme earliness from ESPERANZA, which typically blooms 3-5 weeks before STELLA DE ORO here in eastern Pennsylvania; its rebloom from both ESPERANZA and the Stella half of GOLD FUTURES; and a bit of size, better opening, and clearer color from OMOMUKI and the ADMIRAL’S BRAID half of GOLD FUTURES. A nice garden plant for the weeks before the daylilies really get going. 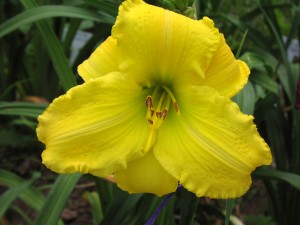 EARLYBIRD HORACE TREELEY is, like Earlybird Branched Brickey, more of a breeding bridge plant than a garden ornament. It’s hardy and so vigorous that it rebloomed twice in its “cadet” year – summer 2, before the seedling bed was to be dug in year 3. In appearance it’s a nice dark yellow, but it’s not my most beautiful tall yellow early. However, it passes on its “groundhog” vigor, dormancy and rebloom to its seedlings, which makes it a good element in a northern early hybridizing program. 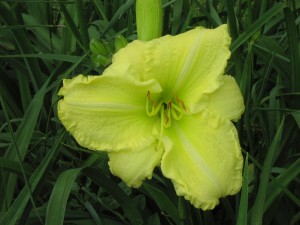 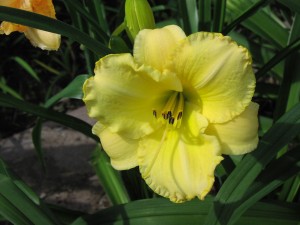 Lemon self with fairly wide petals, piecrust ruffled edges, and a small gold edge on the petals. 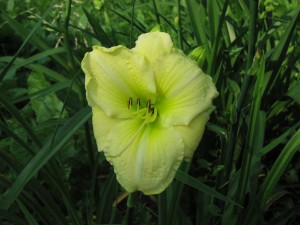 When I registered ELLP in 2006, most of our garden grew in mostly-shade, and I listed its bud count as 16 on 2-way branching. Now that it’s been growing in full sun, its bud count is 32 and its branching is 5-way. It sets pods vigorously, reblooms consistently, and increases well.

EARLYBIRD LEMON-LIME PARFAIT was my second major break in my search for excellent northern extra-early daylilies. I had already gotten EARLYBIRD SUNSHINE, which is Whatley’s CANDOR onto McEwan’s ESPERANZA. My two goals were to improve EARLYBIRD SUNSHINE’s form and continue to lighten the color to provide a parent for all the other colors I wanted. I chose another Whatley, FROST AVENUE, as the match. I attained exactly the plant I was trying for.

ELLP is a yellowish-looking cream with a large lime halo above a green throat. As a parent, it produces kids with clear tones of many colors. All have huge lemon-lime watermarks. The 2011 clear pink intro EARLYBIRD ROSALEE PINK is an EARLYBIRD LEMON-LIME seedling, and other ELLP kids and grandkids are in the pipeline. 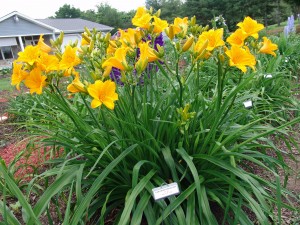 EARLYBIRD ORANGEADE is a brilliant springtime daylily “bush”, luminous in the sunlight. Here in eastern Pennsylvania (zone 6), it usually begins blooming in mid-May, while STELLA typically begins in mid-June. Rebloom keeps going as long as it gets enough rain. You won’t mistake EO for a modern daylily – it retained something the trumpet shape as well as its color and bloom season of its h Middendorffii ancestor, but for a month plus of delight before the regular daylilies show up, you can’t beat it. 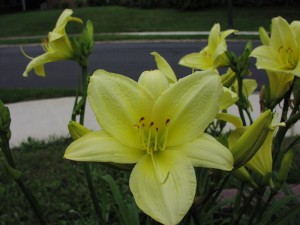 EARLYBIRD SUNSHINE, the ancestor of much of my Earlybird hybridizing program, is a cross of Whatley’s early cream CANDOR onto McEwan’s ESPERANZA, one of the earliest northern-hardy daylilies. ESPERANZA is a converted seed of (ELFIN X PLAYBOY); half of ELFIN is species daylily H. Middendorffii, so EARLYBIRD SUNSHINE is one eighth species! 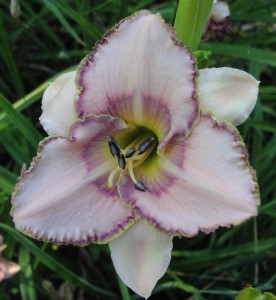 A triple edge of mauve, lavender and yellow highlights this lavender-pink daylily with lavender and mauve band over yellow and green throat. FLEDGLING EDGLING is actually ¾ Admiral’s Braid, since Inspired Edge is (True Grit X Admiral’s Braid). This made it an excellent parent for complex edges and eyezones in the pink-to-lavender color range. Hardy to zone 6. 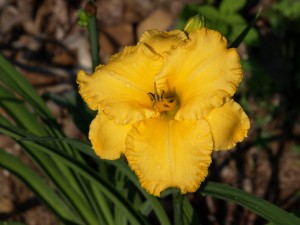 Larger and a little bit lighter in color than SDO, with wider petals, flatter opening, and longer bloom day. Typically opens around 10PM, stays attractive 22 hours. Does fine here in zone 6, but although hardier than AB, it’s certainly less hard than SDO. 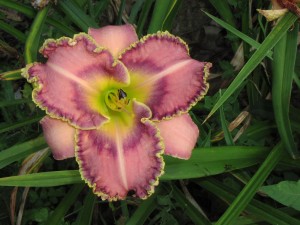 GOLD PRESSED LATINUM carries on the triple edge from FLEDGLING EDGLING. It is a rose-lavender bitone with plum and rose double band and a triple edge of rose, plum, and gold, all over a yellow throat.

HERE’S LOOKING AT YOU KID 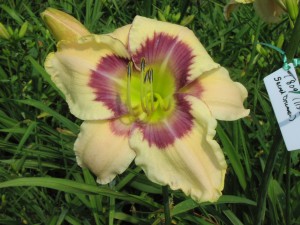 Ron got this back in the 1990s by trying to get more complex eye patterns from the Mokan Butterfly line.   HERE’S LOOKING AT YOU KID does have a somewhat complex eye for its era, but what makes it distinctive is its height (4 feet) and earliness. It’s cream with a complex plum and light plum eye (including a couple of color layers on the sepals) and a thin plum edge. It also has essentially no branching. We considered naming it something “broomstick”.

Despite, or perhaps because of, its quirks, (hey, aren’t we all supposed to be looking for “distinctive”?) HLAYK makes a striking change in the early season from the sea of yellow, gold and orange that filled the gardens during that season back when Ron hybridized it.   Speaking of hybridizing, its pollen is sterile, but it can set pods – IF you gently knock the scape over. Apparently not enough sap gets to its ovule to ripen the seeds. Cheap, and fun. 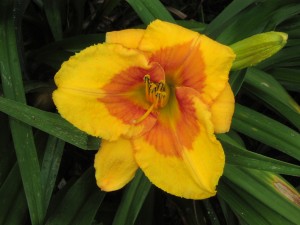 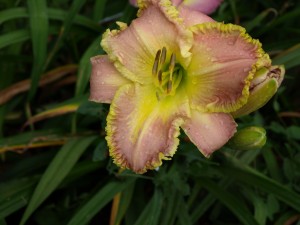 Clear light pink with lighter midribs and sepals and a ¼” bubbly gold edge on petals. Watermark shades gold to melon above a green throat. An excellent parent for northern-hardy pinks with even wider spiky gold edges. 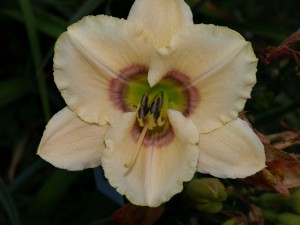 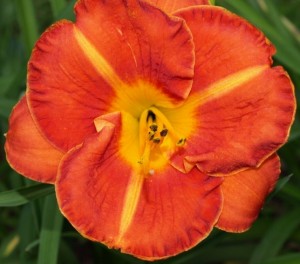 SUMMER SMILES is just that – a flower that stops everybody in the garden and makes them a bit happier. It wasn’t even a planned-out program cross – just one that “seemed like a good idea that morning”. It’s so much fun to live with!

Petals are wider than they are long (about 3 1/3”), and the bright red-orange flower is highlighted by wide yellow-gold mid-ribs extending from the yellow-gold throat, and thin yellow-gold edges. Very vigorous plant, and good pod-setter.