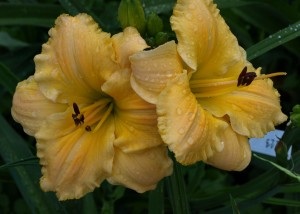 EARLYBIRD DAWN’S LIGHT is another step in Megan’s quest to extend the large-flowered modern-looking northern daylily bloom season by starting it several weeks BEFORE STELLA DE ORO.   An extra-early (early-early) polychrome is highlighted by its pale melon recessed midrib, which is surrounded by arched gold and blush ridges. The ruffles are piecrust and light polychrome. 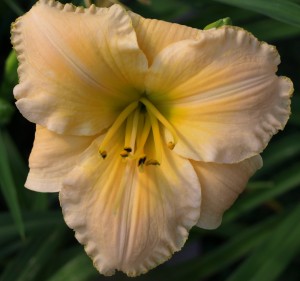 EARLYBIRD DAWN’S LIGHT has fantastically firm substance, and keeps going all day. It’s a hard dormant, and fertile both ways. It passes both its good plant habits and its sculptural form to its seedlings. 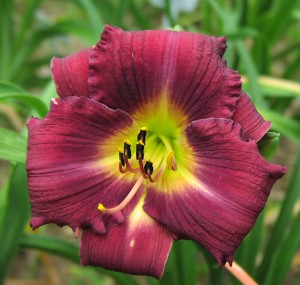 H Earlybird Concord is an early reddish purple, a good color match for Concord wine. It’s a color that’s been missing from the northern early-blooming palette. It’s a good parent for hardy early bloomers in the purple to rose color range. Very hardy. Fertile both ways. 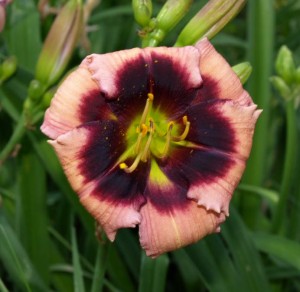 DARK GLOW is being introduced because Megan is a sucker for “metallic” eyes. It is a recurved pinkish polychrome with a glowing intense velvet plum eye, highlighted by a “bleeding edge” on the eye, an intense green throat, and a pale midrib. The dawn-to-dark extended bloom, combined with the striking eye, makes it a good garden plant. 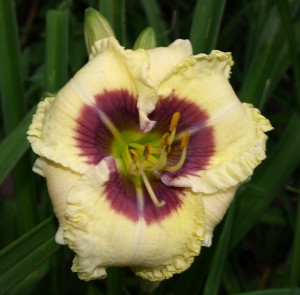 JUST FOR NICE is a lovely patterned daylily.  Its flower recurves consistently, and is highlighted by radial grooving throughout each petal.  Its moderately-ruffled cream petals set off a layered eye of shaded burgundy above a plum-slate zone above a green throat.  The complexity of the eye is enhanced by a pale midrib which accentuates the color gradations in the eye.

As if all this beauty wasn’t enough, JUST FOR NICE opens in the early morning, and extends its attractive appearance past sunset.  Rebloom extends its season from midseason to the end of most garden bloom.  It’s dormant, hardy, and a good increaser

Alas, it’s more-or-less infertile.  Because it opens so early, its pollen is easily skunked by dew, and although it sets seeds, these are also only marginally fertile.   So it’s a lovely garden plant, but no hybridizer’s dream acquisition.  In a Pennsylvania Dutch expression, it’s JUST FOR NICE.